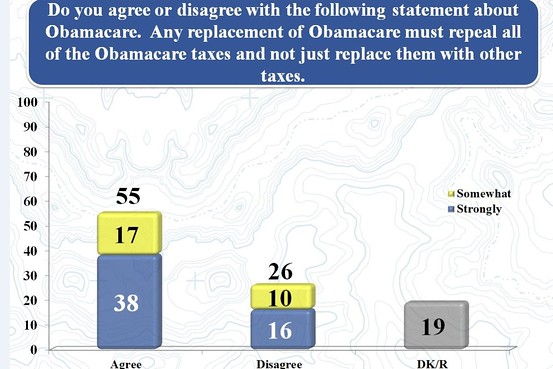 A line buried in a Heritage Foundation policy paper issued just before the November elections hinted at a major fissure point in discussions surrounding a conservative alternative to Obamacare. The distinctions it raised could shape the form of any health-care alternatives the Republican-led Congress considers next year.

The policy brief, outlining the principles for any conservative health-care alternative, included the following lines:

Replacing the current tax treatment of health benefits with a new design for health care tax relief that is both revenue and budget neutral (based on pre-PPACA levels) is the first step in transforming the American health system into one that is more patient-centered, market-based, and value-focused.

The words in parentheses pack the most punch, for they lay down a clear marker regarding budgetary baselines—which define the parameters of many policy debates in Washington.

Polling data conducted for America Next earlier this year suggests that Americans believe the latter. A majority of voters (55%)—and sizable majorities of conservative voters—believe that “any replacement of Obamacare must repeal all of the Obamacare taxes and not just replace them with other taxes.”

Economists and policy experts on both the left and the right agree on the need to reform the tax treatment of health insurance. But there is less agreement on the means. For instance, in one of his now-infamous videos, MIT economist and Obamacare consultant Jonathan Gruber explained how provisions in Obamacare—sold as a tax on insurance companies—ultimately would raise tax burdens on the middle class. Some on the right have proposed that Congress accelerate this tax increase by amending the law next year. Other alternatives to the Affordable Care Act would repeal and replace the law’s tax increases, while still other alternatives (including the plan put forward by America Next) would repeal all of the law’s tax increases, and reform the tax code, without raising additional revenue in its stead.

To the casual observer, these baseline distinctions may seem arcane—but in Washington, they can pack a wallop. Expect the issues referenced in the Heritage brief to resurface whenever the new House and Senate consider health-care alternatives.